IndieCork is proud to announce that their closing night film is the acclaimed feature documentary ‘Breaking Out’ directed by Michael McCormack. Cork audiences will particularly relish this film, as it concerns Cork legend Fergus O’Farrell, one of the most creative music forces to come from Cork.
Fergus O’Farrell was the charismatic voice of Interference, one of the most compelling and influential bands to emerge from the Irish music scene in the 1990s. He was best known for his timeless song Gold which featured in the soundtrack to ONCE, the Oscar-winning film and multi-Tony-award-winning musical. Despite being diagnosed with muscular dystrophy at a young age, through it all, Fergus had to keep singing. His unique talent and love for life inspired a generation of songwriters, even as his own was slipping away. Oscar-winner Glen Hansard was one of those songwriters and never forgot that voice, and in one of the many incredible moments in BREAKING OUT, he performs the ultimate duet as Fergus' greatest gift was failing. This is the story of that voice, and Fergus’ fierce passion and dedication to his art.
Winner of Best Irish Documentary at the Galway Film Fleadh 2019 and hailed by Screen Daily as “deeply affecting” and “a privilege to watch”, this intimate journey into the heart and soul of Fergus O’Farrell was filmed over ten years by director Michael McCormack.

Breaking Out is a Silver Moonbeam Film Production in association with Fís Éireann/Screen Ireland. Element Distribution will release BREAKING OUT to cinemas nationwide and on-demand on November 6th. 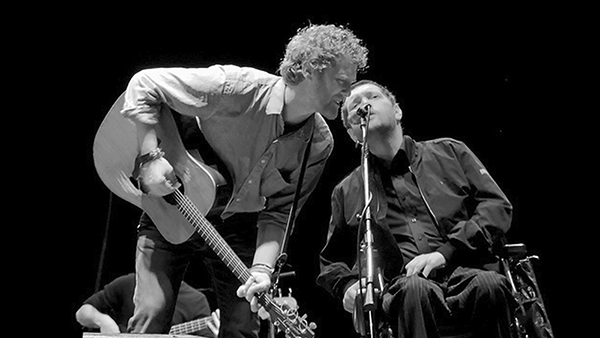