Members of 26th Kinsale Scouts attended the Cork South County Shield event at Kilcully Scout campsite last weekend.
The shield event is a campcraft competition where scouts aged 12-15 compete in teams / patrols of eight against other groups in the county.
The patrols must set camp by themselves and take part in activities over two-nights of camping.
Scouts are tested and marked on rope-work, pioneering (knots), food and hygiene, camp layout and teamwork as well as other skills.
This was the first time that members of the recently reformed 26th Kinsale Scouts have entered the shield competition, which hosted hundreds of other scouts from across the County. Kinsale Scouts attended the Shield event for the experience of the competition, but more importantly to have some fun, make friends and learn the valuable life skills that Scouting offers.
It was also a great opportunity for the Scouts to test some of the new camping equipment which has recently been purchased through fundraising activities within the community, including the car wash and coffee morning held in Kinsale.
Competition was of a very high calibre with many groups having attended the shield event on numerous occasions previously. The Patrol consisted of Jamie Cadogan, Tom Grennan, Connor Green, Oisin Queva, Charlie O’Callaghan and Kian Brown.
The Scouts have been preparing for the event over the last few weeks, by practicing their pioneering skills at the campsite in Saile, where the Scout troop is based, and also visiting Kilbrittain Scouts, who kindly loaned some of the timber needed to construct the camp facilities.
The weather was not particularly favourable throughout the weekend, with constant rain on Saturday making camping conditions and clothes rather damp! That said, the patrol worked endlessly throughout the weekend, to ensure that their camp was of a high calibre. A hot meal, singsong round the fire, followed by a good sleep in the tents, ensured that the Scouts were in good form for the final inspection on Sunday afternoon.
It was with great excitement therefore that after 48 hours of competing, the judges awarded Kinsale with a Gold Standard and judged them first place winners of the Hubert O’Donovan trophy, awarded to novice teams with assistance from leaders.
Huge congratulations to all the Scouts who worked so hard to achieve this great result. Thanks also to Jim Grennan and Jon Green, leaders of 26th Kinsale Scouts, who attended the weekend event and who helped make it all possible.
Pictured are Jamie Cadogan, Tom Grennan, Connor Green, Oisin Queva, Charlie O’Callaghan and Kian Brown 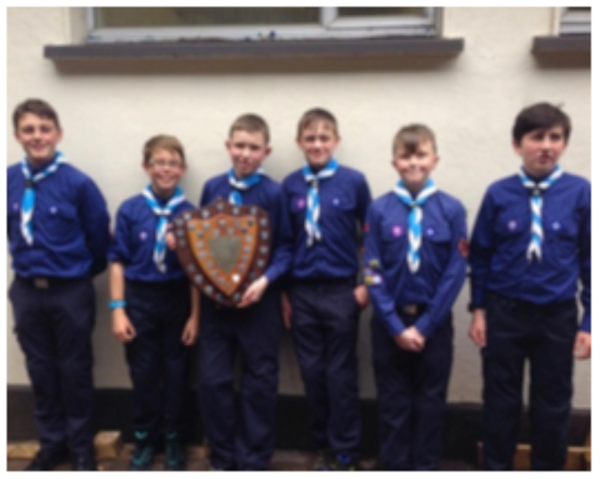