A Day to Remember!
Posted by Kinsale Newsletter on Thursday 23 November 2017

A Day to Remember!

Sunday 19th November, began like any normal Sunday – it was an unusually warm morning and afternoon – the weather deciding to be nice and bring out some spring like conditions to coincide with the small matter of an All-Ireland Club Semi-Final at the pitch on Bandon Road!

It wasn’t a normal Sunday however for Kinsale GAA. By 9.30am the place was a hive of activity with volunteers descending to sort out last minute jobs, set up the Marquee etc. The National Flag flying high above the pitch was keeping a watchful on all the proceedings. Slowly the Bandon Road facility began to fill up with people, excited chatter and predictions on the game could be heard. Both teams arrived and it was then down to the serious business of winning this ‘winner takes all’ match.

A comment was made that walking up Bandon Road felt like walking to Croke Park, with the sea of people and flags on the road!

Donie’s Marquee was as busy as ever with Tea/Coffee being served and a Tuck Shop in operation to keep all the children and the adults happy along with Daly’s Chip Van.

It was a great match contested by two fiercely strong sporting teams playing magnificent football. The supporters who took up every inch of standing room were treated to a classic display to top notch football. Going right to the wire in a nail biting finish with Kinsale holding off a late Moycullen surge to win by a point! The scenes of jubilation will never be seen again on Bandon Road Pitch – the sense of how much winning at home meant to the team and all the supporters was tangible.

Our superb and fantastic official club sponsors Blue Haven Collection, hosted a post-match reception for both teams and management from 3.30pm. The Blue Haven have just been fantastic in the whole lead up to the final and on the day itself – nothing was a problem and if I could use a phrase made famous a few years ago by one President Obama ‘Yes We Can’ was definitely the order of the day, no matter what the request. The club is truly grateful for all the support from Ciarán and all the staff at the Blue Haven – we are immensely proud to be associated with this fabulous business in the heart of Kinsale.

Moycullen were absolutely blown-away by the very warm welcome they received in Kinsale by the club and by the town itself and commented on this on numerous occasions. They headed off back to Galway obviously sad to not have won, but at the same time in great spirits having spent a morning and afternoon amongst new friends – so much so that they have issued an open invitation to Kinsale GAA Club to come up an visit them anytime.

A Win on the Double for Kinsale all round – a great win for our Intermediate Ladies Football Team and a great win for the town of Kinsale in terms of goodwill and the potential of return visits to our wonderful town!

This event was a momentous occasion bringing out the best of what’s good about Kinsale GAA – One Club One Vision – everyone (GAA, Ladies Football, Camogie) coming together as they always do for the greater good of the club - producing a fantastic, professionally run event – standing by the promise made to do our utmost to accord this All-Ireland Semi Final the respect, the glory and the honour it absolutely warranted. This was without doubt achieved at the highest level. Included is an independent Tweet from Mary White of the Evening Echo …..

“Mary [email protected]_white33........Fair Play @ KinsaleGAA! Never been to a more serious set-up for a Club All Ireland Semi-Final. Superb organisation by superb volunteers, well done to all #LGFA

The Thank Yous (please forgive us if we have forgotten anyone)

Firstly to our remarkable Intermediate Ladies Football Team for taking us all on another unbelievable journey all the way to a second All Ireland Final – what an achievement. Everyone in the club and town of Kinsale is so proud of you all – you are both individually and as a group wonderful ambassadors for sport and for women’s sport in particular. Thank you all.
To the community of Kinsale, local businesses and all our schools for your outstanding display of support and encouragement for our Intermediate players and the club in general. With Blue & White Flags and bunting everywhere Kinsale looked absolutely wonderful - you all are an inspiration especially to our young children – as you have shown everybody the true meaning of community spirit.
While it is probably safer to give a broad Thank you to everybody there are some individuals who just cannot go without being given a special mention for the incredible part they played in organising this event.
To the following people who epitomise the meaning of ‘club spirit’ – for their drive and commitment, for the endless hours of meetings and the countless number of jobs that they did to make this momentous match at the pitch the fantastic success that it was. The facilities at Bandon Road on the day were an absolute credit to them - Sincere Thanks and Appreciation to Michael Murphy, Joe O’Leary, Robbie O’Leary, John Maloney, Noel O’Sullivan, Donie O’Leary.
To the All-Ireland Semi-Final Committee for taking on board the huge task of organising the event from start to finish. Huge Thanks must go to Tom Kelleher, Noel O’Sullivan, Catherine Murphy, Pat O’Leary, Eamon Judge, Carol O’Callaghan, Seamus McCarthy, John Martin Nyhan, Emma O’Callaghan.
To our huge band of amazing volunteers who answered the call and gave up a lot of time at the pitch on the two Saturdays before the Semi-Final. Kinsale GAA Club was presented at its very best to the travelling supporters, the press, LGFA Officials, local representatives and to the people of Kinsale – make no mistake that would not have been achieved without you all.
To everyone who helped out on the day with all the various jobs that had to be taken care of, parking stewards, stewards at the pitch, score board, medical staff, Kevin for taking over 500 action photos of the game, the crew in the Marquee (the legends who are Deirdre Murray, Sinead Nolan, Louise Loughnane, Eithne Fitzpatrick, Carol O’Callaghan, Collete Kelleher).
To Brian Collins, Ger Broderick, Jacinta O’Callaghan, Mike Looney, Paddy Loughnane, William Corrigan for organising our Girls and Boys Under 10 to play during half time. And of course to all our amazing under 10 players who kept a huge crowd entertained with some fantastic football skills.
To Joe O’Neill, Brendie O’Sullivan and Pat O’Leary who have banished the words ‘tyres’ and ‘painting’ from their vocabulary, burning the midnight oil to have them done on time – but so worth it!
Thank you to St John’s Ambulance for being in attendance and to Dr. Padraig McGillicuddy for organising.
It was a great privilege and honour for Kinsale GAA Club to host this prestigious event. Once again many thanks to everyone along the way for all their help and support.

This was a major event for the club to host an All-Ireland semi-final in Kinsale, club and community support in making this a success was evident leading up to the day. Pre match tensions, speculation, hype preceded the kick-off. The team, seasoned from last year’s Junior experience didn’t let anything get in their way, the crowds roar at the throw in was the ignition point and it was drive on from there.
The home side captained by Aoife Keating took control of the game early on, they were up 6 points to 2 after 12 mins, with Orla Finn and Sadhbh O’Leary contributing. There were many encounters going on, Kinsale backs were knuckle tight on their opponents, an epic battle at midfield, Lorraine Copithorne didn’t give an inch to Aine Nic Dhonnchada, the Connaught Final player of the match, wingers Tracey McCarthy and Georgia Gould were composed and confident distributing great ball to the forwards also Nicole Quin kept the midfield ticking over. The ½ time scoreboard read Kinsale 0-12, Moycullen 1-5.

Kinsale now facing a light breeze were under no illusions but the 2nd half was going to be an uphill battle and had to dig deep to keep up the momentum. Trading points for the quarter was keeping it at Kinsale’s advantage, but there were near misses too close for comfort also, Aisling Judge and backs Aideen Lynch and Emma O’Brien had it all to do to keep the those at bay. Caoimhe O’Callaghan and Christine Keohane were a huge impact supporting the defence. Menacing runs from the Murphy sisters Ellen & Jenny proved vital in the last quarter while also adding to the scoreboard, Faye Ahern showed her intercounty experience thumping over 2 points in the last 5 mins.

With full time looming and Kinsale 6 points ahead there was just injury time to go. Moycullen gained momentum, having got back their sin-binned player slotted over 2 quick points. Then a long driving ball from Nic Donnchada found the net. This was heart beating stuff with awe’s clearly audible. The final whistle sounded to much delight of the home side with a 1 point victory.

Kinsale now head for the All Ireland Final against Dunboyne in Parnell Park on Sun 3rd Dec at 1:45. History also being made as Kinsale is the 5th club to reach Junior and Intermediate club finals in successive years. 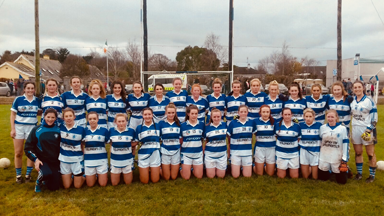