Some 25 professional chefs from all over the country converged on Ireland's "gourmet capital", the starting point of the Wild Atlantic Way.
The All-Ireland Chowder Cook-Off, which is sponsored by Clóna, Cork Gas (Red FM), took place in a marquee on the lawn at Acton's Hotel. It was the highlight of a two-day food festival, hosted by the town’s Good Food Circle, in association with Kinsale Chamber of Tourism and Business.
The best chowder was judged by the ticket holders, many of whom had travelled from all over Ireland to support their competing chef. Around 1000 people sampled a variety of delicious chowders, noting their preferences on a card before casting their vote. Competition among the chefs was intense, with variations on the classic chowder, and imaginative baking adding to the fun.

The top 3 chowders voted by the public were Weavers Inn from Clare, The Cottage Restaurant from Leitrim, and the overall winner, and Cork’s first winner, was the Beara Coast Hotel all the way from Castletownbere
The Beara Coast will travel to Newport, Rhode Island, Kinsale’s twin town, in summer 2018 as a guest judge in the Newport, Rhode Island, chowder competition.
Mark from the Beara coast said afterwards. "I never thought I'd win," he said, "It was great just to come here and cook, I can't believe we've won!"

Liam Edwards thanked all the chefs and their teams for travelling to Kinsale at their own expense and putting on such a fine display of seafood. "It is a great day for seafood, a great day for chowder, and a great day for everybody," he said. Entertainment was proved by our local celebrity DJ Anthony Collins
The winner also received the Derek Davis Perpetual Trophy, named in memory of the event's original compere, who presided over the event in his inimitable style. The trophy was commissioned from Kinsale Silver especially for the All Ireland Chowder Cook-Off, and designed and made in their Market Street premises.
www.kinsalerestaurants.com www.facebook.com/Good.Food.Circle

Pictured at the The All Ireland Chowder Cook Off at the weekend in Kinsale were Overall Winners Mark Johnston and Mark Golden from the Beara Coast Hotel in Castletownbere with Liam Edwards, Chairperson of the Kinsale Good Food Circle and Denis Mulvihill from sponsors Clona.
Picture. John Allen 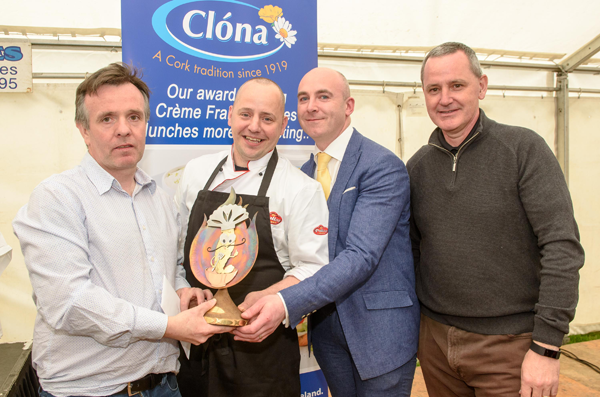