Plagued by speeding motorists, Belgooly Residents’ Association Network, who recently received a green light from Cork County Council to erect driver speed activated signs in the village, will host a bingo fundraiser evening in the Huntsman Bar on Friday September 21st at 8pm to pay for the traffic calming measures.

Secured under a scheme administered by Cork County Council, the traffic calming measures are set to cost the local community over €3,600 to install.

While the cost of the scheme may well raise an eyebrow in some quarters, Chairman of Belgooly Residents Association Network, Mr Pat O’Regan said: “The cost was a small price to pay to ensure our elderly and younger residents are safe as they access the village at a number of locations, including the popular local walkway and pedestrian crossing .”

Pointing to a recent study by a local secondary school student, Charlie O‘ Callaghan, which received significant praise as an entry into the BT Young Scientist Exhibition, as well as securing a meeting with former Gardai Commissioner, Noreen O’ Sullivan, on foot of his results, Mr O’ Regan said: “ The average speed of vehicles through the 50km zone in Charlie’s findings was 66.2km, a figure backed up the council’s own figure, which found 64% of all motorists ignoring the legal limit.”

Acknowledging the support of the council officials, gardai and elected representatives in securing a solution to the issue, including obtaining the services of the Gardai Go-Safe van for the village, Mr O’Regan said: “The erection of the lights is another important step in the process in reducing motorists’ speed in the village.”

Calling on the community to support the upcoming fundraiser, Mr O’Regan thanked Keary’s Nissan, Cork, for sponsoring the bingo evening, with Con O’Leary from Keary’s Nissan remarking: “Keary’s Nissan are delighted to be associated with this project. Nissan take safety very seriously, and anything that might save a life or serious injury is well worth supporting. Kearys have many loyal customers in the Belgooly, Riverstick, and Kinsale area who use this road on a daily basis, and we are delighted to be involved. “It’s a great example of a community coming together to achieve something really tangible.“

Pictured at Kearys Nissan, who are the main sponsors of the Belgooly Residents Association Network Bingo night on the 21st September in the Huntsman to raise funds for driver speed activated signs in Belgooly, are Con O'Leary, Kearys Nissan; Dylan And Aoibhe O'Regan with their father Pat O'Regan; Eddie Kelleher, Shane McGowan and JJ Hurley from the Belgooly Residents Association Network.
Picture. John Allen 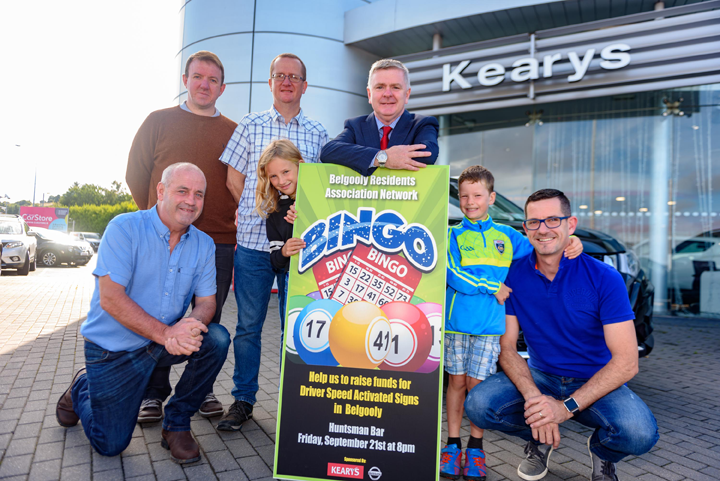