Kinsale RNLI volunteer lifeboat crew were involved in two rescues on Sunday last, February 17th. The first involving a horse and the second was to assist three young men swimming around Sandycove Island.
Late in the afternoon the lifeboat launched following reports that a swimmer had sustained a knee injury after entering the water near cliffs off the island, a popular site with open-water swimmers. When the lifeboat arrived on the scene, the lifeboat crew lifted the casualty and two other swimmers into the lifeboat where they were assessed. They were brought back to the station where a further medical assessment was conducted by trained RNLI personnel and nurse Emer Scannell (who was visiting a crew member). The casualty was later taken by ambulance to hospital.
Earlier in the day, the Kinsale lifeboat crew rode to the rescue of a horse named Paddy that got into difficulties in the Bandon River. The horse’s hoof was trapped in the framework of an oyster bed, requiring a member of the volunteer crew to dive under the water and release the panicked animal. After several attempts, Paddy was safely returned to the shore, much to the relief of his owners.
Kevin Gould, Lifeboat Operations Manager at Kinsale RNLI lifeboat station, said: 'We urge everyone to exercise extreme caution on or near the water, particularly at this time of year. On days like today our RNLI training proves invaluable and we are all relieved that both call-outs ended well. Today’s rescues give a new meaning to the expression ‘surf and turf’.' 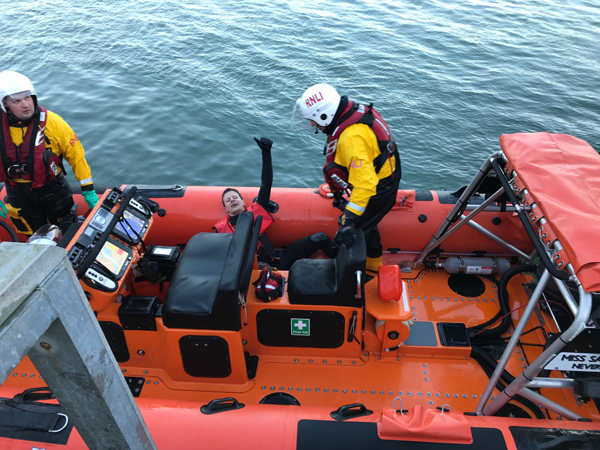