Volunteer crew members of Kinsale RNLI gave a warm welcome the His Royal Highness the Duke of Kent who made his first visit to the busy West Cork lifeboat station today. The Duke has been Patron and President of the RNLI, the charity that saves lives at sea, since 1969. He spent almost an hour meeting volunteers and hearing details of successful rescues by the Kinsale volunteers, including the Sean Anthony in April 2016 when three Portuguese fishermen were saved from a sinking trawler, and the evacuation of 30 people from the sailing vessel Astrid that foundered outside Kinsale Harbour in July 2013. The Duke was introduced to Christopher Keane Hopcraft, one of the young people rescued from the Astrid, and Mrs Janet Rutherford who received medical attention and was brought to safety after she was injured on board a yacht. Members of the local community were also invited to meet the Duke, including representatives of Kinsale's fishing fleet, along with RNLI volunteers from West Cork's newest station in Union Hall and representatives of the GAA, partners in the RNLI Respect the Water campaign that aims to halve the number of coastal deaths by 2024.

Kinsale RNLI Lifeboat Operations Manager, John O'Gorman, said: "It was a honour and a privilege for us to meet the Duke who has provided unwavering support to the RNLI for almost half a century. Our station on the Wild Atlantic Way is a long way from the RNLI HQ in Poole so we rarely get the opportunity to meet someone so close to the heart of the charity. In that time he has visited the vast majority of lifeboat stations and we are delighted he chose to add Kinsale to that list. He showed a great knowledge and understanding of our lifesaving work."

His Royal Highness the Duke of Kent talking to RNLI volunteer James Grennan and his daughter Maebh on a visit to Kinsale RNLI Lifeboat Station today. 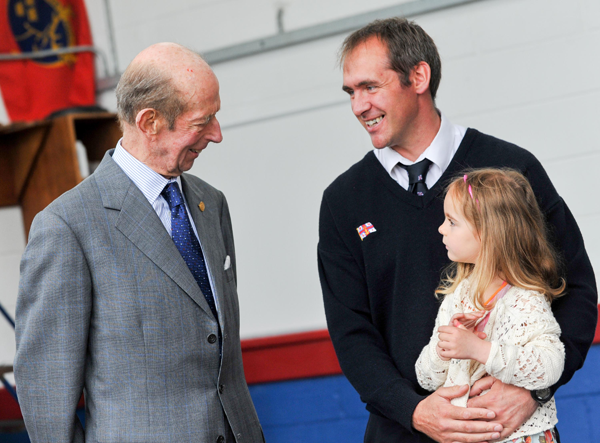