A public meeting on Future Kinsale was held at Kinsale Community School last night, Tuesday 1st October. The four items on the agenda at the meeting were: a community-run Municipal Hall, traffic, sustainability and a free wi-fi network for Kinsale town centre.
Future Kinsale is community initiative to help plan for the next twenty years in Kinsale. It’s mission: to build a thriving, healthy, sustainable future for Kinsale. As a co-op it is a company limited by guarantee which has no shareholders but seven members who are directors. It is run according to a constitution structured under the ICOS guidelines. Members drive Future Kinsale’s direction through the board of directors who each serve for up to two three-year terms and is each elected by members of Future Kinsale.
Any Kinsale resident can become a member of Future Kinsale, can invest in specific project and can volunteer. Ideally every resident will be a member and have a say in creating the future of Kinsale. Members have a say by attending membership meetings and project specific working group meetings. All funds held by Future Kinsale will be used for the benefit of Kinsale.
Future Kinsale is a way of taking ownership of and managing public assets like the town hall or car parks for the benefit of the community. It is a way of sharing the resources we have – people, money, land, buildings and so on for the benefit of everyone. It aims to bring together entrepreneurs, creators and financial experts whose worlds might not otherwise collide. And it aims to make it possible for staff in local businesses to afford to live in their own town.
Future Kinsale plans to incorporate wholly owned subsidiary companies for all substantial projects. These will in many cases aim to generate profits from their activities which will be returned to Future Kinsale to help fund other developments.
Based on the results of a survey conducted last year, Future Kinsale identified the main issues that need to be addressed. The six pillars are: transport and infrastructure, environment and sustainability, arts culture and community, tourism and heritage, digital and technology, enterprise and education.
At the meeting last night the future of the Municipal Hall formed a large part of the informative talks. First to speak was Arts Officer for Cork County Council, Ian McDonagh. He provided advice on applying for arts funding from the County Council, giving insight into how applications are assessed. He also presented information on a town in Wales from which Kinsale can take example, Caernarfon. During the 1990s a development group formed in the town with the vision: “anything is possible…through creative thought and innovation.” The group bought up one derelict or run-down premises at a time and renovated it, thus financing the buying of the next one until they had renovated twenty buildings and revitalised the town.
The main thing that drew Ian McDonagh’s attention, in relation to Kinsale Municipal Hall, was the arts centre that the local development trust built there. The building combines a theatre, cinema, 24 business units, arts space, rehearsal area, meeting rooms and a café bar.
It is this idea of the hybrid between theatre and office space that the next speaker, Mervyn Greene of the CHQ building in Dublin, which houses offices, restaurants, the EPIC museum, a micro-brewery and exhibition spaces, expanded on. He pointed out that rent from the office spaces during the day finances the building’s use for arts and exhibitions at night. Putting different elements together makes it sustainable. His advice for Future Kinsale was to build something run on commercial and sustainable lines. The building’s secondary use can then (in terms of funding at least) be for community groups and arts and culture. He also used Ludgate Hub in Skibbereen as an example to look to.

Civil engineer Mike Walsh spoke on the topic of traffic in Kinsale. He shared ideas that came about following a study of Kinsale transportation that was carried out in 2009. He showed maps of proposals for various by-pass roads, going from Pewterhole Cross around the town to the New Bridge. There were also maps of suggestions for pedestrianising parts of the town, most notably Short Quay. There was also the suggestion to remove parking from the Pier Road in order to put in a footpath. However, he pointed out that before these proposals could be considered the issue of parking needs to be resolved. Ideas for this include an above ground multi-storey in the Church carpark and a park and ride system. One remedy to congestion that councillors are actively pursuing is the introduction of timed deliveries on Pearse Street before 10am, with delivery bays by the Blue Haven and in the Glen. Alan Clayton, who chaired the meeting, pointed out that traffic is a particular area that we as a community can think about and have a 5,000 people strong voice when putting in a proposal. Liz Creed, who was active in Transition Towns for the last 15 years spoke briefly on the topic of energy and biodiversity. An energy masterplan started this year involves making case studies of houses such as estate ones, a dairy farm and the Further Education College. In 2020 grants will be applied for the have these buildings retrofitted with a view to having 50% of houses retrofitted by 2030 and Kinsale having its own solar energy supply. A biodiversity action plan is being put together by the end of this year. Projects already carried out within the community include birds n’ bees landscaping, the community orchard and biodiversity zones.
Last on the agenda was the topic of free wi-fi in the centre of Kinsale. Jamie Phillips, app developer, demonstrated a mock-up of a Kinsale app to which tourists will be directed when logging on to the town wi-fi. The app serves as a sales channel for businesses in town, thus generating revenue which can go back into Future Kinsale. The app can also be used in conjunction with barcodes around the town that can be swiped to bring up text or videos of information or history, in any language. It can also be a communication platform for example for coach drivers to call passengers, thus tackling the traffic issue also. Plans are in place for the free wifi to be launched in time for the Gourmet Festival.
Future Kinsale is keen to get everyone in the town involved in debate on issues and thereby creating its shared future. To get involved find it on facebook or sign up for the email newsletter through the Future Kinsale website. www.futurekinsale.home.blog/ 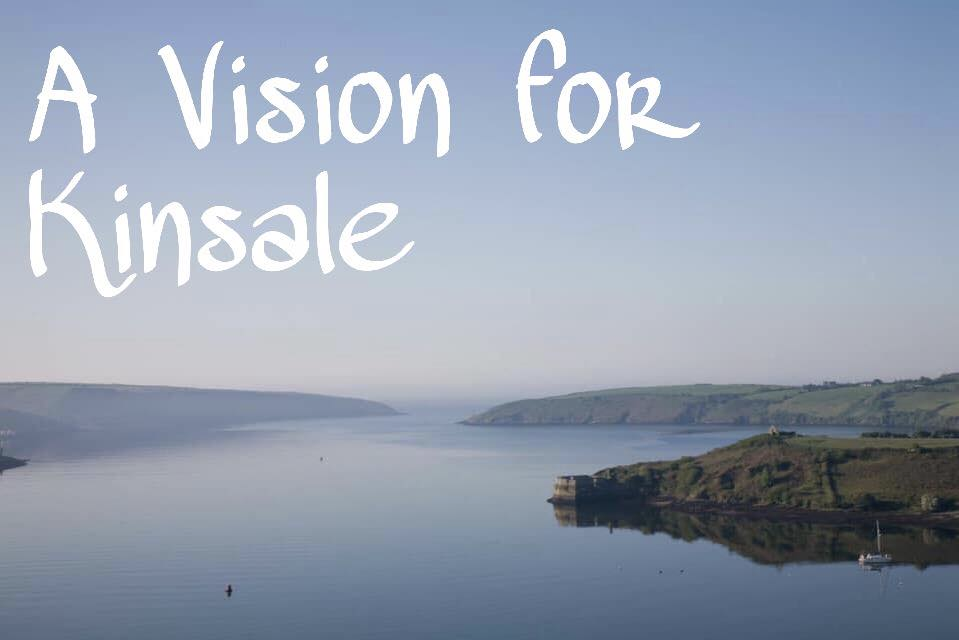