Having recently been crowned Ireland’s No 1 Foodie Town by the Restaurant Association of Ireland, Kinsale has just announced a new addition to its Foodie Calendar, Kinsale Restaurant Week, from February 18th to 24th.

Kinsale Good Food Circle, which is made up of eleven member restaurants, will be serving a two course menu for €20 each evening for the week, along with their regular A La Carte menus. This initiative is to encourage diners to experience the amazing selection of quality and variety that Kinsale has to offer at a very attractive price point at the beginning of the season and as a thank you to their loyal customers.

The Good Food Circle is made up of eleven member restaurants namely, Fishy Fishy, The Bulman, The White Lady, Finns’ Table, The Blue Haven, Actons Hotel, Jim Edwards, The White House, The Trident Hotel, The Supper Club and The Man Friday.

Kinsale Good Food Circle, which was set up in 1976 with an ethos of a rising tide lifts all boats, currently organises two major festivals each year; the annual Gourmet Festival in October now in its 43rd year and one of the longest running food festivals in Ireland, as well the hugely successful National Chowder Cook Off in April, where contestants from all over Ireland battle it out to become the best Chowder in Ireland and represent Ireland on the international stage.

Welcoming this new week long festival, current Chairperson of Kinsale Good Food Circle Ciaran Fitzgerald said, ‘’This is a very welcome addition to the Kinsale Calendar of events. Having recently won Ireland’s No 1 Foodie Town and Ireland’s Most Enterprising Medium Sized Town, Kinsale Restaurant Week is the perfect combination of Food and Enterprise to kick start our 2019 season early.’’

Kinsale is home to the current President of the Restaurant Association of Ireland, Liam Edwards of the famous Jim Edwards Restaurant who commented, ‘’This is a great opportunity to sample what Kinsale Good Food Circle Restaurants produce all year round at a reduced price. It will be a week where Irish produce will be showcased by Kinsale’s top chefs.’’ 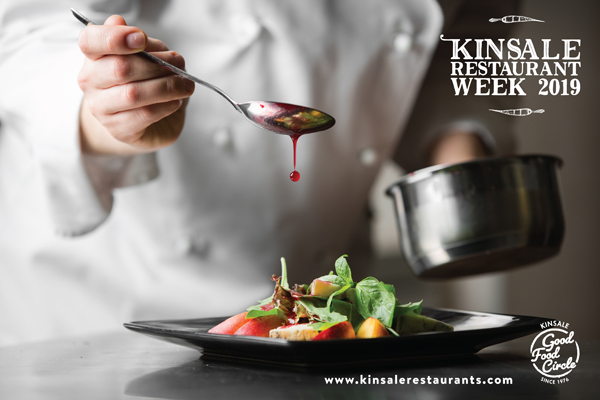