VEX Robotics is a programme which enables students to learn about Science, Technology, Engineering and Maths (STEM) through designing, building, programming and competing with their robot in competitions organised by DELL EMC.

Kinsale Community School TY robot team, made up of 22 male and female students, took part in the Vex Robotics Final in CIT on Friday 19th January. In November the team had won a qualifying scrimmage in St Aloysius School Cork and much robot redesign and coding has taken place since then to ensure our resilience in this final. The team has been mentored throughout by Miss Niamh Hay and Mr John Corcoran with advice and support from Mr Adrian McLaughlin from DELL EMC.

The day almost didn’t begin when the bus did not arrive at the school due to treacherous icy roads in the Kinsale area on Friday. Two teachers transported the core team and just made it in time for the robot inspection. The team won all of their six rounds of qualifiers and along with six rounds of driving and coding skills which put us in top spot after the qualifiers.
We entered into the alliance stage in poll position which meant we had the pick of the 24 teams to go into the quarter finals with. We teamed with first timers Carrigaline which was an unexpected move as we ignored some strong traditional teams like Buttevant and CSN who have a strong reputation in this competition. We had built a strong bond with the Carrigaline team when we hosted them in an informal scrimmage in our school in December.

The alliance worked well. We easily won both the quarter final and semi-finals but the final was a real nail biter. It is played in the format of best of three games, each three minutes long. The first game was a struggle as our robot flipped and we had an uphill battle to recover from then. Carrigaline righted us and we thanked our lucky stars we had chosen them as our alliance. We went into the second game 1_0 down. The two next games were excruciating as it was very close right up until the buzzer with Kinsale and Carrigaline clinching the deal in a tightly fought competition.

To our surprise we not only won the tournament but also the coding skills and driving skills award and ultimately the excellence award which secures a place for us in the world championships in April 24 to 28 in Kentucky USA . Now we need to undertake a massive fund raising exercise and are looking for sponsorship to help us get there. 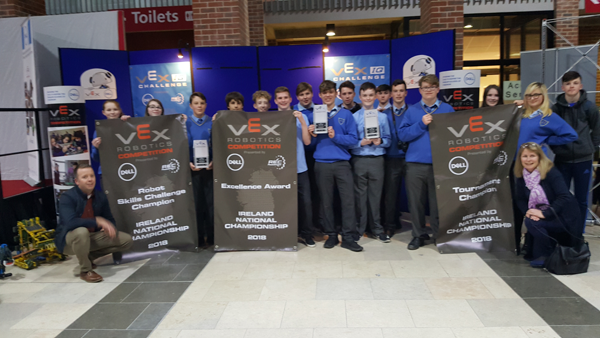