Hallowe’en 2015 marks the 10th year of the Kinsale Hallowe'en Parade.

Rosita Kingston, who has organised and run the Parade since its inception in 2005, talks to the Kinsale Newsletter about this fun, family event:

"The invitation remains the same since 2005: Gather in costume in the Town Park on Pier Road., on the afternoon of October 31st from 3pm onwards. At 4pm, led by a stilt walker, we parade through the town. Final destination is the plaza area behind the Temperance Hall where a fire show or some such spectacle marks the finale.

If you have ever dressed up and participated or been an onlooker, you will appreciate what a spectacular event the Kinsale Hallowe'en Parade is, with bumper attendance each and every year.
It’s free and it’s a lot of fun.
To date, I have not been in receipt of any regular funds, which is hard to believe really – 10 years on.
The main source of money to pay for performers is the customised collection buckets you see at the checkouts in local supermarkets during October. I appreciate that local people do give generously, but I need a guarantee of a regular sum, annually.
Going forward, what I require is partnership with a local business or businesses who will sponsor Kinsale Hallowe'en Parade annualy. A guarantee of funds in the kitty each autumn, will allow me to plan ahead and secure talented acts well in advance while also securing the future of a much loved, local event.

For eight years, I put on this great community party on my own, in my own time, using my own resources!
I had the idea, and I just did it – the advertising, printing, signage, route planning, canvassing of shopkeepers, liasing with gardai, booking the performers… I know it may sound absurd, most people think it’s the production of an official committee, but it’s just been me, Rosita Kingston.

Anyone who has ever organized a big event knows about the running around, phone calling and effort it takes to do it successfully.
10 years on, it’s still going strong, so I have to keep doing it! - just not alone any longer.

Last Hallowe'en, 2014, I was to be away, which meant I had to get a possee in place to help make Kinsale Hallowe’en Parade happen.
Now there are a couple of others I can rely on for organisational help. You can join us if you can fulfill any organisational / creative role. No big commitment involved, we meet just two times during October.

The 10 years I have been running the Kinsale Hallowe’en Parade, have seen a lot of big changes for me personally. Our older daughter Lucy is no longer with us. Lucy was a participant that first year, aged 9, driving her wheelchair. That was the first and last Hallowe'en parade Lucy attended. The following year, she was ill and in the Mercy Hospital over Hallowe'en, then died a month later in December 2006, at home in Dunderrow.

Ruby Parker my younger daughter, a toddler in the inaugural Parade photo, is now a teenager and my right hand woman in Parade Planning.
We moved from Dunderrow to Kilbrittain in 2009.
10 years has seen a total of 3 house moves for us to date.
My brother Paul Kingston, the eldest in our family, died on Hallowe'en 2011 – I had just finished doing the parade & was on the way to Dunderrow for trick or treating, when I got the call. My father George Kingston died in October 2014.
New parade goers are coming up through the ranks too, the cycle of life." 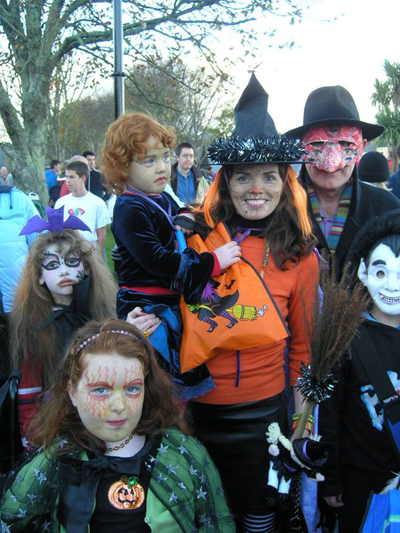