Kinsale, Tuesday 22nd May: Cameron Good, Commodore of Kinsale Yacht Club announced details of two major events for KYC this year. The Optimist National Championships (31st July â€“ 4th August) and The Brewin Dolphin Dragon Gold Cup (8th-14th September) are due to attract huge number of sailors to Kinsale and, in turn, are expected to benefit the local economy.

Guests at the reception included Cllr Fred Treacy, Mayor of Kinsale, members of  Kinsale Chamber of Tourism, the Kinsale Good Food Circle, local dignatories and members of Kinsale Yacht Club who will be involved in both events.

The Optimist Nationals expect over 200 entries to Kinsale from all over Ireland. As participants are aged under 14, they will bring a family entourage and atmosphere to Kinsale as well as requiring accommodation and availing of all the amenities Kinsale has to offer as a premier tourist destination.

The Brewin Dolphin Dragon Gold Cup is considered the World Cup of Dragon Sailing and several world champions and ex-olympians have already entered from 15 countries as over 200 dragon sailors are expected to sail off Kinsale over six days in September. These include current world champion, Lawrie Smith, Marcus Wieser, Tommy Muller and Vincent Hoesch â€“ all well known international sailors with many world-class titles between them.

â€œWe are delighted to host these prestigious events at Kinsale Yacht Club this season and look forward to welcoming the best Optimist sailors in Ireland to Kinsale in July, as well as the International Dragon Fleet in September,â€ said Cameron Good, Commodore, Kinsale Yacht Club.  â€œWe are grateful for the title sponsorship of private investment managers, Brewin Dolphin, official product partner Dubarry and the support of the Irish Sailing Association, Failte Ireland,â€ he added.

A presentation was also made by Bobby Nash of Kinsale Yacht Club, outlining the benefit of Kinsale Marina to the local economy and how it may be developed in these challenging times.

For further information on these events please go to www.kyc.ie   or www.dragongoldcup2012.com 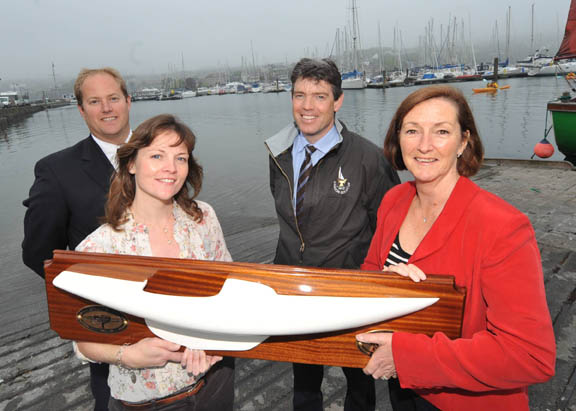