Who makes the best chowder in Ireland?
Come to Kinsale for our 10th All Ireland Chowder Weekend on Sunday April 5th and find out!
Following on from their hugely successful Veuve Clicquot Restaurant Week, Kinsale Good Food Circle is preparing to host the annual All Ireland Chowder weekend from April 2nd to 5th in Acton's marquee.
Competing will be over 25 of the finest chefs in Ireland to win the coveted Crown of Ireland's best Chowder, following a series of heats in individual counties.
Celebrating a decade of the event this year, it all started as a one-day affair which has now grown to a four-day festival. Thursday night sees a spectacular fashion show in aid of Kinsale Youth Support Services while on Saturday the much-loved Street Feast kicks off at 1pm, with an array of entertainers including stilt walkers, balloon makers and trad bands.
Joining us again this year will be the Wild Atlantic Way Craft Beer and Distillery Festival from 4pm in the Marquee featuring craft beer and spirits from all along the Wild Atlantic way with music from local bands.
The headline event is the Clóna sponsored All Ireland Chowder Cook Off, with a new addition this year of the Kinsale Kids Kitchen Takeover programme, the competition starts from 2-4pm in the marquee in Actons Hotel.
We are delighted to welcome several new entrants this year, Ocho Tapas in Antrim, Shantully Inn in Cavan and McCafferty’s in Donegal, returning competitors from Quinlan's Seafood in Kerry, Scholars Town in Louth and Bridge House Hotel in Offaly to name but a few who will be competing to take the title, €1000 prize money, Kinsale Gourmet Weekend tickets and our Derek Davis Perpetual trophy.
Who decides the winner of the chowder competition? You do! In this unique atmosphere with fantastic aromas of over 25 chowders bubbling away and over 1000 people voting, the winner is truly the people's choice. Tickets will be available at the door from 1pm for €15.
Set up in 1976, the Good Food Circle is now made up of 11 restaurants, namely Fishy Fishy, The Bulman, The White Lady, Finns’ Table, The Blue Haven Hotel, Actons Hotel, Jim Edwards, The White House, The Supper Club, Man Friday and the Trident Hotel, all joined together with the one aim of producing top quality food in the beautiful setting of Kinsale.
Currently the Good Food Circle organises 4 events each year being the annual Gourmet festival in October now in its 44th year, Kids Kitchen Takeover in November, Kinsale Restaurant Week in February and lastly the All Ireland Chowder weekend.
The full list of finalists (subject to change) : Antrim, Wicklow, Cork, Leitrim, Kildare, Louth, Donegal, Longford, Offaly, Cavan, Kerry, Waterford, Tipperary, Westmeath, Limerick, Galway and Dublin.
www.kinsalerestaurants.com 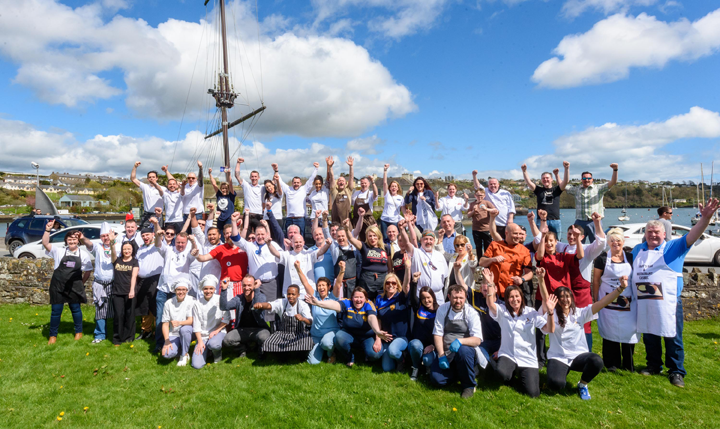