A hundred and fifty people, from all walks of life, listened, with total attention, as economist, TV pundit and ex TD, George Lee gave his opinion of the present economic situation and how we must go forward to prosperity again. They were at the first Breakfast meeting of Kinsale and District Lions Club in The Trident Hotel on May 3rd.
George extolled that, whilst we must accept our own responsibility for the situation we are now in, it is the time to be positive and win new markets that will provide our stability in the future.
Georgeâ€™s theme was that the best companies in the world do not succeed just by looking for profits, but by ensuring the excellence of their goods and services and believing in their people. He quoted many emerging Irish businesses that were already succeeding in this. He likened his brief sojourn in the Dail to a trip to see the Wizard of Oz, where he had been looking to the oracle (government) to be able to solve the problems. But he emphasised that it will be the talent of the Irish people that will put us on the road to recovery, however long it may take.
In general, we do not approach affairs as, say, the Germans do for instance. But the Irish have always been able to succeed by using their novel and intrinsic skills to overcome difficulties and to progress in their own way. George listed surprisingly new and successful ventures emerging from Irish minds around the world, often helped by an Irish Diaspora that was enthusiastic to help. Breakfast plates were made silent as George spoke fluently and knowledgably in his hard- hitting and pertinent assessment. He insisted that it will be we ourselves, the imaginative and optimistic people of Ireland, thinking originally and pursuing our best ideas, who will lead us to an era of prosperity again. The Wizard of Oz will not have the answer!
The proceeds from the Breakfast will go towards a Youth Enterprise seminar for gap year students in September and to providing laptops for young enthusiasts in the Coderdojo initiative which develops programming skills. Both are fully supported by the Lions Club. 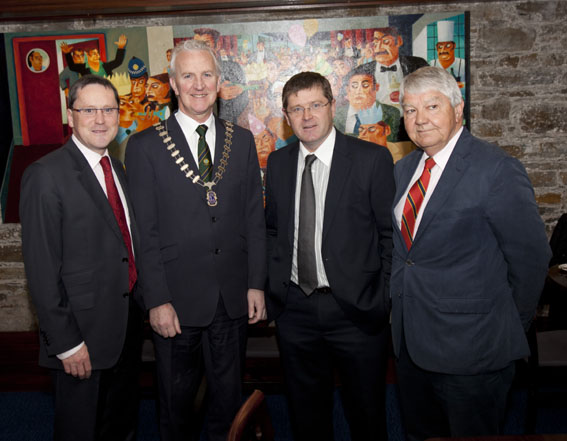