On Saturday last, Kinsale RNLI volunteers were called to rescue a cow called Ghost that had fallen from a field onto rocks in Kinsale harbour.

The lifeboat launched at 12.36pm in Gale Force 7 conditions and choppy seas. The year old, black and white Fresian had dropped some distance and was in an agitated state when the lifeboat arrived on the scene. Two crew members entered the water and attempted to lasso the animal, but the cow panicked and resisted their efforts. The lifeboat returned to the shore and took onboard the owner, local farmer Brian Hayes, fitting him with a lifejacket to ensure his personal safety. The lifeboat then returned to the scene and the volunteers assisted the Mr. Hayes to fit a halter that enabled the lifeboat to tow the creature back to the shore. Safely back on dry land, the crew was happy to hand Ghost over to Mr. Hayes and leave him to coax the beast back into her trailer. Mr. Hayes said: ‘It really couldn’t have happened to a worse animal. She’s always been hyper since she was a calf. She’s out in the shed now drinking and eating normally, thankfully. The lads were great and I really am fierce grateful to the RNLI.’

This is the second animal rescue for the Kinsale crew in recent months. In February, they assisted a horse that had become trapped in local oyster trestles. RNLI lifeboat helm Jonathan Connor said: ‘While we are delighted to save animals, our primary concern is always for human life. We were eager to prevent the farmer, who was a non-swimmer, and other bystanders from entering the water and attempting the rescue themselves, and were also conscious of a number of people on the nearby beach who could have been put in danger.’ 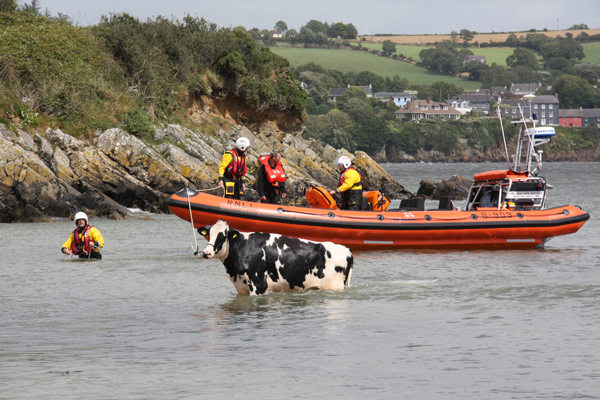