Kinsale restaurants are preparing themselves for one of Irelands longest standing food festivals, the 42nd Kinsale Gourmet Festival taking place this weekend. A weekend of food and fun awaits in Ireland’s number one Foodie Town as recently voted by the Restaurants Association of Ireland.

The festival has been sold out since August with the much coveted tickets attracting Food enthusiasts from all over the world to experience a culinary feast over two days, featuring the best of local produce from Kinsale and West Cork, prepared by chefs from the member restaurants of the Kinsale Good Food Circle with special guests this year from Kinsale's sister city Newport Rhode Island.

On Saturday the Mad Hatter’s Taste of Kinsale, sponsored by Musgrave’s Market Place, starts with Christy's Champagne Reception along with an important briefing of the days proceedings from MC Comedian Barry Murphy! Guests are then taken by group leaders Alice, the Mad Hatter, the March Hare and the Field Mouse on a magical foodie walking tour around colourful Kinsale, sampling the gourmet delights, as they move from location to location showing off their colourful headwear while enjoying the amazing creations by the teams of chefs from Kinsale and Newport, Rhode Island. Prizes are awarded for the best hats from Kinsale’s own award winning and world renowned hat boutique and milliner, Hattitude. The day concludes with an aperitif at The White Lady Hotel where guests get to dance off the days indulgences to the sounds of DJ Anthony Collins of Glastonbury fame. For the very brave the party continues to the sounds of Jazz Diva herself Sharon Crosbie at the Blue Haven Hotel.

The Festival concludes on Sunday with the Clóna and Pallas Foods Sponsored Seafood Spectacular at Actons Hotel. The day commences with a Blacks Gin and Champagne reception, followed by a Seafood Feast prepared jointly as one team by the chefs of the Kinsale Good Food Circle Restaurants. MC Comedian Barry Murphy will entertain the guests followed by the amazing Pat Fitz Band of The Voice fame.

This year’s festival will be extra special with close to 50 participants from Kinsale sister city Newport, Rhode Island, who will be welcomed with a drinks reception hosted by Kinsale Chamber and Kinsale Good Food Circle on Thursday night and finishing with a Civic Reception in Cork’s County Hall on Monday. 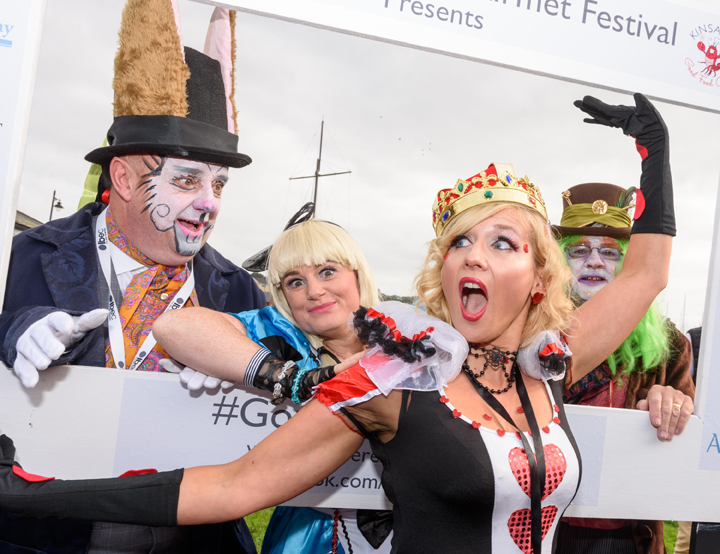