Born in Kinsale in 1760 it is believed he contracted an illness in his 17th year which caused abnormal growth where he grew to just over 8 feet tall. Following an approach from a showman in 1779, he went to Bristol where he travelled from fair to fair as a sideshow.

Cotter died in Bristol in 1806 at the age of 46 years and was buried in the Catholic Chapel, Trenchard Street. He had the greatest horror of grave robbers so, adhering to his wishes, his grave was dug to a depth of 12 feet in solid rock. It was said five men were able with ease to fit into his coffin with the lid placed upon it.*

1n 1906 his coffin was unearthed during reconstruction work at the chapel, his bones were examined by experts and re-interred within the chapel.

A coffin plate was uncovered in St. Joseph’s Hall, Trenchard Street, Bristol, about 1924, bearing the inscription ‘Patrick Cotter-O’Brien of Kinsale, Ireland, whose stature was 8 feet 4 inches. Died September 8th 1806 aged 46 years.’ It can be seen however that while the coffin plate gives his height at 8 feet 4 inches, it had been changed from the original 8 feet 1 inch.

The Picture-Perf® image is perforated in 2mm stainless steel and then powder coated in Anodic Brown architectural powder.

The inspiration behind this wonderful gesture came from Fred Graepel, Managing Director of Graepels: “I have been fascinated by the Giant of Kinsale ever since I visited the Museum as a child on a Primary School Tour – I was 8 at the time and I was fascinated by the size of his chair, knife and fork, his slippers and his boots. I have never lost that fascination and have never forgotten how wondrous it all was to me as a small boy.”

He continued: “Graepels have a new product called Picture Perf and, as there was nothing to represent the actual physical height of Patrick Cotter-O’Brien I felt the timing was perfect to create and donate a life size model of the Giant so that all future visitors, young and old, can experience the sense of wonder in real time.

We also want to highlight our new capabilities of perforating pictures into metal and would love to have more images in the town representing people, events in history.”

Kinsale Museum is now open for the season Tuesday to Saturday, 10am to 2pm and is staffed entirely by volunteers.

What a fabulous gift to Kinsale Museum and the town. We look forward to seeing further installations in Kinsale in the future.

Pictured with the Kinsale Giant from left to right are: Patricia Canniffe, Dermot Collins and Denis Murphy, who were all delighted with the new installation. 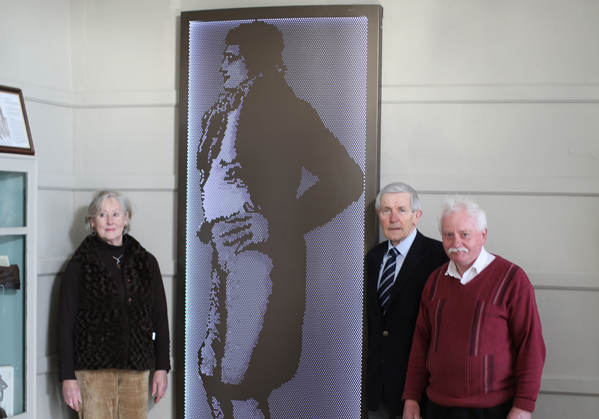