At a very dignified ceremony on Saturday May 7th to mark the Annual Commemoration of the sinking of the Lusitania, a large gathering at St. Multose Church also witnessed the unveiling of a memorial stone to Margaret Mackenzie Shineman, whose remains had remained unidentified for over 100 years. Mrs Mackenzie Shineman, who had only recently been married, was on her way to Scotland to surprise her parents when the great liner was struck by a torpedo off The Old Head of Kinsale on May 7th 1915. Unveiling the headstone was Mr Richard Woods, whose relatives were on board the great liner on the faithful day. Later he laid a wreath with the Chairman of Kinsale Historical Society, Mr Terry Connolly at the graves of those at St. Multose Churchyard who had drowned as a result of the sinking. Also attending the commemoration were the Rev Peter Rutherford and Fr Stan Hession, with local historian Dermot Ryan detailing the events that led up to the sinking of the great liner as well as describing how Mrs Mackenzie Shineman had been identified after an exhausting process that had taken over a hundred years. 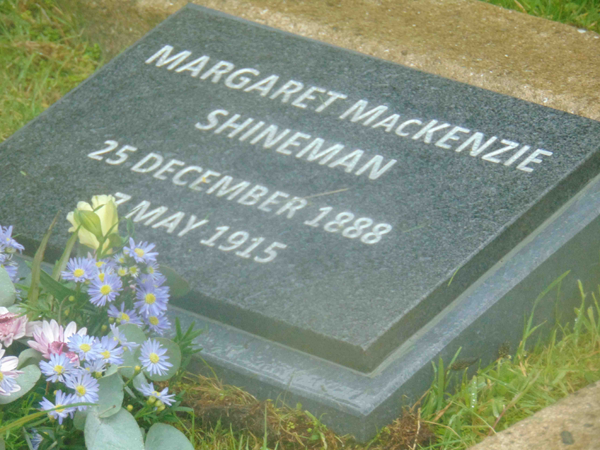