Mary Nolan Hickey is running around the entire coast of the Island of Ireland to raise funds & awareness for the RNLI. 65-year-old Mary Nolan Hickey, is the only woman to have completed every single Dublin Marathon (all 38 of them). She’s also completed the gruelling Marathon des Sables in the Sahara Desert, known as the ‘toughest foot race on earth’. To mark her 50th year involved in Athletics, Mary decided to take on her biggest challenge yet while trying to raise as much money as possible for the RNLI with a target of €20,000! Mary started her epic journey in Arklow, Co. Wicklow, on New Year’s Day. She aimed to cover up to 5000 kilometers, using coastal routes hoping to get back to Arklow in time to get her first pension payment in June when she turns 66!
Stopping off at as many RNLI stations as possible, on her once in a lifetime adventure, Mary reached Glengarriff today, Monday 19th March, and got the great news over the weekend that she has exceeded her €20k target!
Speaking about her journey Mary said: “I wanted to prove that age not a barrier. Coming from a coastal town I have a deep affinity with our local RNLI station & volunteers and have huge admiration for the brave men and women who risk their lives to save lives at sea”. Mary, who has depended on the goodwill of communities along her route for accommodation, has been astounded by the response so far. “The support has been overwhelming,” she said. “I have met the most amazing and encouraging people along the way”.

Keep an eye out for Mary who hopes to reach Kinsale on March 28th, let’s show her a tremendous Kinsale welcome! 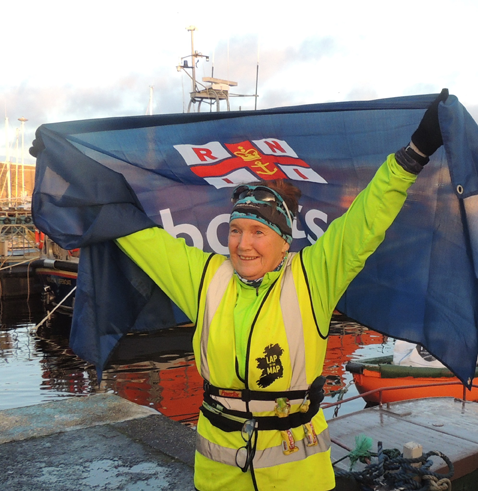