Have you ever wondered what that beautiful old wooden caravan, stove-pipe sticking through its roof, with a wisp of smoke is doing sitting quietly in a corner of Kinsale’s plaza? Well it belongs to the traditional Showman Bill Piper who owns the funfair in Kinsale.
The West Cork artist June Fairhead has documented this pearl of the past with photos and stories and called the project 'Showman' (further stories are beginning to flow into the project's Facebook page). With help from a nostalgic public she hopes to crowd fund her project to get a book and exhibition printed. The photographs are quite cinematic and give a glimpse into Bill's life in the caravan and what happens behind the scenes of the funfair.
When you visit the seaside town of Kinsale, amble down the Pier and watch the yachts as they bob and sway to the strains of Perry Como, Elvis Presley, and other old favourites, coming from Piper's Funfair. When you enter the fair it's as if the clock has turned back. The fair is a living museum that has barely changed in forty years. This is just one aspect of its charm. No death defying rides or thumping house music on offer here, just good old-fashioned swing boats, bumper cars and a carousel turning round to tunes from the 20s up to the 60s.
June is crowd-funding the project on www.fundit.ie/project/showman. She is offering generous rewards for the public's investments. These start with signed copies of the book and archival prints.
Then she moves up the scale to offer masterclasses in making a photographic book,and painting classes that all include invitations to the launch. Her highest reward is a beautiful handmade limited edition linen-bound box-set of some of the images. All printed on Hahnemulle archival paper, which in time should become a collector's item. Some of her other work is in the collection of the O.P.W.and the Bank of New York as well as many private collections in Ireland, U.S.A. Australia and New Zealand.
As June says "this is a project I am passionate about, I wanted to document Bill Piper in his curious caravan at the fair not just as an art project but as a part of social history. I love the ambience and colour and it reminds me of the fairs that used to exist all over Ireland in my childhood." She also wants to keep the memories alive for the generations of families who have visited the fair
over the years - particularly for the people of Kinsale. With small and larger crowd-funded investments, her target of €4000 can be reached, and this would pay for the printing of her book and
photographs for an exhibition launch.
She has already designed and printed one book as a prototype.The cover has a nostalgic photograph of Bill’s traditional wooden caravan glowing against the night sky. The title Showman is
printed and embossed in gold bronze to add an element of faded vintage glamour. Inside the book, the photographs will be printed on uncoated paper to add to the retro feel.
She first got interested in the project through pure curiosity. Every day during the winter months she would pass the wooden caravan parked in the town square, and wondered who lived in it. Then during the summer months she saw it moved up to the fair. Her curiosity grew until she felt compelled to ask Bill Piper if she could make a project about him. He told her all about growing up
as a Showman, about many of the artefacts collected, and traditions that go with the job. All this is engagingly documented and illustrated with photographs taken both inside the caravan and outside in the fairground, from morning until nightfall.
As Bill says, "you cannot teach someone to be a 'Showman', it's in your blood." He is someone who always has a joke and bit of banter for everyone. Bill is the ringmaster and the fairground is his show-ring. However in the background there is a loyal team that includes his son Brendan who keeps the show on the road. Some of his team have been there for thirty and forty years since
Bill's father's day.
June has taken intimate pictures that tell a wonderful story. There are unique details in the photographs and story, telling of uncovered little gems of tradition that will bring a smile to to everyone.
The photographs are unusual: they manage almost to put the viewer into the spaces portrayed as if in a film. In short, the book is delightful and would make an excellent gift for anyone. If you feel
like following the project and snapping up the generous rewards June has on offer through her fund-it campaign, just follow the link or type it in to your browser:
www.fundit.ie/project/showman
You can also follow her on June Fairhead Art and photography - Facebook
https://www.facebook.com/junofairhead/
And her blog on www.junefairhead.com 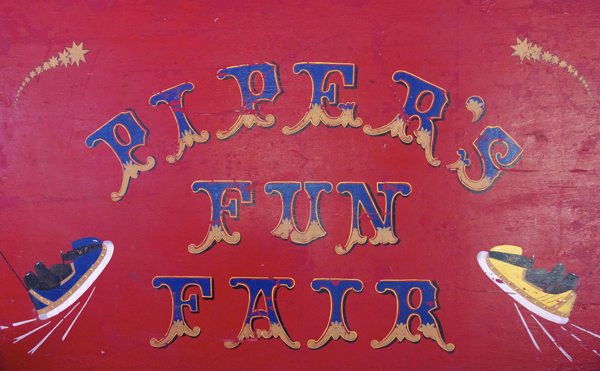