MINISTER SIMON COVENEY LAUNCHES COVESTONE ASSET MANAGEMENT SOVEREIGN'S CUP IN KINSALE 26th-29th JUNE 2013 AND PRAISES LOCAL CO-OPERATION
â‚¬600,000 Economic Impact for the Area
Simon Coveney, TD, Minister for Agriculture, Food and Marine praised Kinsale Yacht Club and local businesses at a reception to launch of the Covestone Asset Management Sovereign's Cup 2013.
The four day event from 26th-29th June is expected to generate over â‚¬600,000 for the tourist town, as 800 sailors and families from Ireland and overseas are invited to enjoy great racing and all that Kinsale has to offer. Kinsale Food Circle restaurants are preparing to showcase the best of local produce, as they prepare to feed a virtual navy of visiting sailors added to the many historical and artistic attractions.
With over a quarter of entries to date from the UK and current entry levels considerably up on two years ago, KYC predicts a bumper year for the Covestone Asset Management Sovereigns Cup 2013. Interest is such that there are only 20 places left of the  discounted "early bird"  entry rate.
"We are delighted with the financial assistance provided by our title sponsors, independent investment managers, Covestone Asset Management. Their Support has help fund  our new interactive web page which has been instrumental in attracting the large number of early entries. It is fantastic that Kinsale features high on sailors' list of "must do" events this year," said Mike Walsh, Regatta Director.
With the popular Dun Laoghaire to Dingle race and ICRA Championships in Fenit Co. Kerry taking place just before The Sovereign's Cup, KYC has introduced a unique Triple Crown Trophy for the best performing IRC boat on all three events.
As well as the excellent sailing conditions, race management and social programme ashore, sailors and their supporters are expected to take full advantage of the many attractions Kinsale has to offer. The new web page www.sovereignscup.com provides direct links to accommodation, restaurants and activities in Kinsale. Also, there are special discounted rates with Irish Ferries for those travelling from the UK.
The Sovereign's Cup was established in 1995 and this year marks the 10th staging of this hugely popular cruiser regatta. The biennial event is expected to attract over 140 boats from all over Ireland and the UK to compete for the prestigious Sovereign's Cup for best all round score in IRC and The Portcullis Trophy for best progressive handicap.
Entries are being taken in Class 0, 1, 2, 3, 4 and three White Sails classes. This year the Quarter Ton Class Championships and the European 1720 Championship will be taking place during the Sovereign's Cup, bringing many new visitors to Kinsale from Scotland, South of England and Wales. 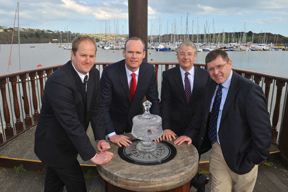