The hugely successful St. Patrick's Day Maritime and Street Parades have drawn to a close for another year.
The Pier Head and other viewing points were thronged on the eve of St. Patrick's Day for the annual Maritime Parade. Beautifully lit boats cruised into the harbour under a still moonlit sky to the sounds of the Kinsale Voices choir while St. Patrick was rowed up the Bandon river to the Pier Head by the Kinsale & Dock Rowing Club. The daring Thundercats on water entertained adults and children alike who were also delighted with free balloon modeling and glow bands. Larry and Lucy Leprechaun also put in an appearance!
St. Patrick's Day proved to be another beautiful day in Kinsale. The Blessing of the Shamrock took place at the Parish Church at 12pm Mass which was followed by the prize giving for the Children's Art Competition in the Tourist Office. A Ceilí at Emmet Place with live traditional music was enjoyed by visitors and locals while children were thrilled with free face painting and balloon modeling.
The main event, the Street Parade, kicked off just after 4pm. A colour party from the Defence Forces led the Parade with Grand Marshal, Charles Henderson, who was honoured for his years of voluntary service to many organisations in Kinsale. Almost fifty entries wound their way through the streets of Kinsale to the reviewing stand on Pier Road. The standard of entries is increasing every year with some outstanding floats, costumes and themes this year.
A prize giving reception was held in the Trident Hotel following the Parade. The prize winners are listed below. To see photos check out our Facebook page https://www.facebook.com/KinsaleNews/ 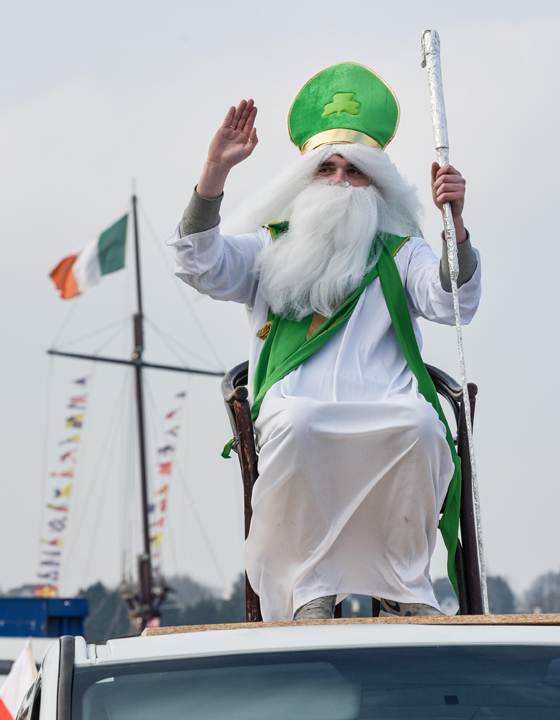